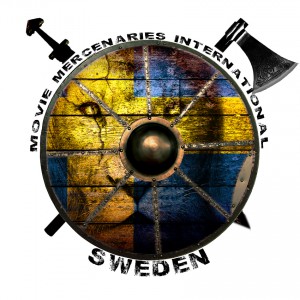 The story so far

We are Team Titan, a group of four passionate circus performers and stuntmen with a massive interest in historical fighting styles. With a resume of over a thousand live stunt shows for live events and several movies and TV-Series appearances.

In the summer of 2013 Seoras Wallace, Chieftain of Clann Wallace, an industry recognised Movie Sword-master, Fight Director and established Hollywood producer (Braveheart Gladiator King Arthur etc) came to Sweden to provide a master class in weaponry and film fight workshop. Two of us from Team Titan attended where Seoras recognised our fighting skills immediately and invited us to join his elite film fight crew based in Scotland. The rest is, as they say, history.

We were invited to Scotland for an EPK (Electronic Press Release) shoot ”Bloodlust” filmed a fight sampler for the American producers of the proposed TV series “Wallace” and submissions for other various historical planned productions including the next “Pirates of the Carribean”. We discussed establishing a Movie Mercenaries International casting agency in Sweden, to enable Swedish based cast crew and specialist performers the opportunity to work on National, International productions and events as part of the renowned Movie Mercenaries International Film Fight Crew representing Sweden. With such luminaries as Mel Gibson, Russel Crowe, Liam Neeson, Sean Connery, Riddley Scott on their client base MMi are well respected the world film industry

We also discussed and agreed to develop a cultural programme of exchange between Sweden and MMi members from Scotland, Ireland, England, Wales, France, Italy and Portugal, recreating the principles of the original Varjag/Hanseatic league, established originally in Visby, whereby we plan to re-establish the ancient trading federation with a cultural addition. In 1303 Seoras’ famous ancestor, William Wallace (Braveheart), as his family legend has it, visited Hamburg Lubeck and Visby, finally gaining Scotland’s main trading seaports Hansa membership, but was betrayed on his return to Scotland and quickly executed by the English before he could deliver his news to the Scots people. Now seven hundred years later, Seoras Wallace representing Scotland (Cruathnie Clann) Jakkin Wiss (Varjag Viking) representing Sweden will finally make agreement and fulfill this seven hundred year old treaty in Visby in the summer of 2014

History and future in the making

Scotland and Sweden have a lot of history in common going back a thousand years. This exciting history provides an existing cultural blend of many eras to stand on and develop in the future. Our goal is to bring our people together in three distinct Professional cultural and trade organisations Cruathnie Varjag (Culture) Movie Mercenaries International (Film TV Events) and the Hansa (Trade). To find pride, joy strength and co-operative endeavour in our common and shared ancestry, creating cultural links and work opportunities. Historically the combination of the two cultures created a feared and ferocious community in the west of Scotland that became known as the infamous Gallóglaigh (Galloglass) The Scots Irish Viking Spartans!

Team Titan´s Jakkin Wiss, Anton Franzon and Jimmy Hellgren went to Scotland as curious and hopeful stunt performers. They returned to Sweden, official branch and representatives of MMi SWEDEN and in kinship as part of Clann Wallace family of Scotland as their custom allows and as the Hansa representatives the Clan Wallace and community of Scotland wish to create trading links with.

The co-operation between MMi Scotland and MMi Sweden will become, possibly, the best news in years regarding Sweden’s fledgling film industry bringing our efforts and quality of work international recognition and access to the Hollywood and international film industry. We are currently working closely together to create the formula for MMi, that will have branches in Ireland, Spain, Portugal and many other countries.

TRADING: The Professional link through MMi has opened many opportunities for trading between our two countries from contemporary goods and services to traditional and cultural goods Tourism and education which will be developed through our forthcoming Hansa agreement

CULTURE: The two aforementioned International agreement lends itself perfectly with our co-operative international agreement not only between our professionalism but also an opportunity to share the rich tapestry of our two cultures linking the Cruathnie Varjag or Clanns and Viking communities. Already we are in discussion to bring the Scots Birlinns (Longboats) to Sweden with reciprocal trips for our own people to visit Scotland and Ireland to cultural events… and more.

We are now establishing MMi Sweden officially, to begin with we will soon be holding special castings, historical fighting workshops and begin the work of offering our contact opportunities to our colleagues in the film industries here in Sweden. We will also be opening our casting books for a limited number of actors, principles, extras and walk on artists crew and film service providers demonstrating it is not just fighters and stuntmen MMi cast it’s also a unique and vitally important opportunity for everyone in Sweden who would wish to work in the International Film, TV and event industry.

With Seoras Wallace behind us, the man behind stunts in such productions as Highlander, Braveheart, Saving Private Ryan, 300, and many more, there is a wealth of experience, knowledge and contacts that will be invaluable for the future and we are bringing our Swedish experience, strengths and hunger into that mix… By invitation.

MMi looks to set to become one of the biggest specialist casting agents in the world bringing together the best of the best for Movie, Film and TV action series on one single database for the worlds finest Directors and Producers and now Sweden has representation at the top negotiating table by members of Team Titan MMi/Sweden.